Stay on top of current marketing trends and topics. Receive news and tips to keep your organization healthy. 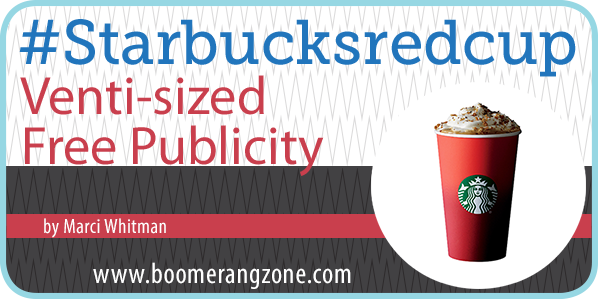 ‘Tis the season of giving.  Critics of the Starbucks holiday cup are giving a venti-sized free publicity campaign.  People are posting photos of their Starbucks branded cups in front of stores with  hand drawn design and holiday message.  Customers are doing so in front of the stores, tagging friends, and using the hashtag #StarbucksRedCup.  Wait for it… two Twitter accounts have appeared (https://twitter.com/StrbucksRedCup and https://twitter.com/StarbcksRedCups) to carry on the silly conversation.

Time posted an article the other day highlighting the evolution of the red Starbucks cup starting back to 2009. Here are a few of my favorites: 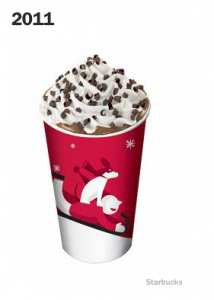 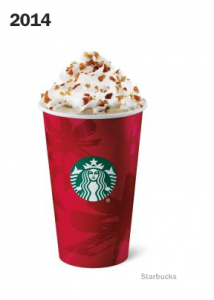 I don’t know about you, but the watermarked bows on a red background from 2014 don’t exactly jump out as a religious symbol of the holiday.  Christmas is my favorite holiday.  I wait all year for the season to come around, and I’ve been known to say, “if I had anymore Christmas cheer, I would be spittin’ tinsel.”  My grandmother taught Sunday school and put on the Christmas program with the kiddos for 40 years.  The Christmas holiday for me is more than a silly red cup that does or doesn’t have a message/symbol on it.  For me, it’s about the lights, smell of a freshly cut tree, cookies and time reminiscing with family.  A time to feel at home, to slow it down just a tad and single holiday jingles.  I send out hand-made holiday cards with brace yourself snowman and snowflakes. Feel free to make that go viral 🙂

What if the only fact behind what Starbucks did is use a design technique for their cup? The Times article referenced Starbucks as saying they featured “a two-toned ombré design, with a bright poppy color on top that shades into a darker cranberry below.”

When you look at it, Starbucks received an early Christmas present compliments of people who have made this cup a world crisis.  What do you make of the red cup conversation?  Eek, what does the plain white cup say? Share your thoughts with us.